The panchayati front: harnessing the potential of local self-government to fight COVID-19 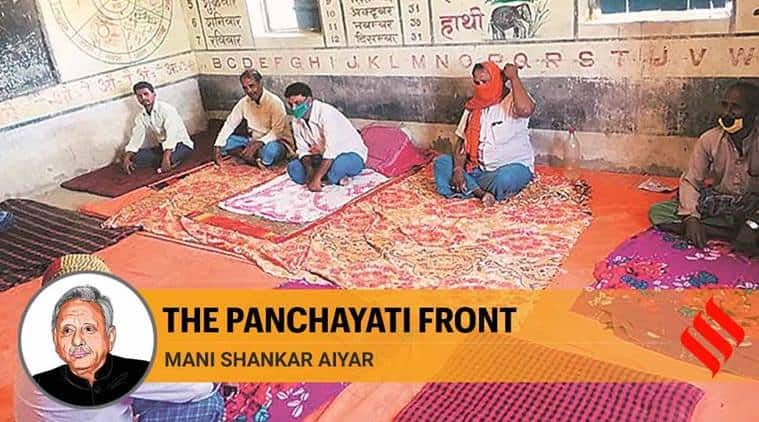 An unintended but welcome consequence of the fight against COVID-19 is that the “confrontational federalism” that has characterized the Centre’s relationship with states, especially those run by non-BJP parties, is now giving way under pressure from the national crisis. to an element of “cooperative federalism” promised in 2014, then reduced to a “jumla” over the following six years. Repeated teleconferences between the Prime Minister and key ministers have made a centralizing establishment accept, however reluctantly, that there is no way to resolve the COVID-19 situation except through a measure of cooperation between the Center and States, with the Center acknowledging the need to develop solutions through a consultative process involving States and providing States with the flexibility to tailor guidance to their respective circumstances, and States accepting the need for guidance from the Center as well as the adequate availability of funds to respond to this totally unexpected and very costly contingency.

What remains to be pushed and hammered out is greater devolution to panchayats and municipalities in accordance with constitutional obligations under the 73rd and 74th Amendments, enshrined for a quarter of a century in Parts IX and IX A of the Constitution. The best starting point might be entry 23 of the eleventh annex which reads: “Health, sanitation, including hospitals, primary health centers and dispensaries” among the list of 29 indicatively defined subjects for devolution to panchayats, subject to enactment of conforming legislation. by state legislatures. All state legislation has included this subject and therefore empowering panchayats in this regard with functions, finances and officials is now a legal obligation under state law and governed by the provisions of section 243G.

This article provides that the state legislatures “may by law endow the Panchayats with such powers and authority as are necessary to enable them to function as institutions of self-government”. This means that state governments cannot and should not treat panchayats as extensions of state government, but as “institutions of (local) self-government”. If the logic of “cooperative federalism” is that states should function not as implementing bodies of central government but as autonomous units within the federation, then panchayats should also be designed not as an extension of governments states but as “units of self-government”. ”. Thus, the panchayats must be integrated into the three-level decentralization system provided for by the Constitution: Center-State-Panchayats (and municipalities).

One of the main reasons for Kerala’s incredible performance in “flattening the curve” is its robust system of effective decentralization which has enabled the Kudumbashree program to operate in conjunction with the panchayats, as highlighted by the State Finance Minister Thomas Isaac in a recent article in these columns (‘Ahead of the Covid curve’, IE, April 17). Now that the easing of the lockdown seems to be bringing a flood of migrant workers who are happily returning to their home villages, it becomes even more important to fully involve the village panchayats (and municipalities as “self-governance institutions”). government” – 243W) in the anti-COVID-19 campaign. Indeed, unless cooperative federalism is extended to the third level of government, few results will be achieved as this is the grassroots where the campaign must be planned and implemented. It should also be noted in particular that until full resumption of normal economic activity, it will be necessary to provide free or heavily subsidized food to millions of villagers, including repatriated migrant labour. Entry 28 of the eleventh annex mentions the “public distribution system” among the subjects of decentralization. There are many other entries in the annex that are relevant to this exercise, but once states accept the panchayat partnership in letter and spirit, coverage will inevitably be extended to all relevant entries in the eleventh and Twelfth Schedules and compliance legislation of the States.

The entire governing establishment of the Center and the States must realize the enormous potential of local autonomy to fight against COVID-19. There is an army of 32 lakh elected officials in the panchayats and around two lakh more in the municipalities who are eager to rise to the occasion. Well over a third of them, around 10 to 12 lakh, are from the scheduled castes and tribes and therefore in contact with the most needy, destitute in every village and town. There are about 14 lakh women who have established themselves by election as village chiefs. They constitute the largest body of democratically elected women in the world. About one lakh of them are officials in their respective panchayats and municipalities. Can you imagine a woman emerging from her home in the middle of the night to try to prevent the slaughter of two sadhus, as the sarpanch woman of the village of Palghar did, under any circumstances other than considering herself responsible for everything what happened to her? locality because that was the mandate she had received from her village community? Imagine the constructive role these women can play as “frontline workers” in the fight against the coronavirus.

The most important requirement is to plan for the reception of the influx of migrant labour, including testing, quarantine, isolation, social distancing where possible, and to ensure that all without exception are fed and housed and receive the monetary subsidies which are essential to keep body and soul. together. Last mile delivery can only be comprehensively provided by empowered panchayats (and municipalities) reporting to their respective gram sabhas and ward sabhas mandated under Sections 243 A and 243 S. Relying exclusively on bureaucracy local for last mile delivery has been the bane of the administration.

Planning to resist the penetration of COVID-19 requires the full deployment of district planning mechanisms provided for in Article 243 ZD involving the three levels of panchayats and municipalities united in the district planning committee. At the village and neighborhood level, it is essential to involve the gram sabhas, gram sansads and ward sabhas. Only then can the war against COVID-19 become a grassroots movement; only thus in a country as vast and populated as ours can we succeed.

The Prime Minister missed a fantastic opportunity to deliver this message to the nation on National Panchayat Day, April 24, when he broadcast to the nation. Had he done so, India and the world would have sat up and noted that the humanitarian face of the battle mirrors the faces of people in panchayats and municipalities.

The writer is a senior Congress leader and former Union minister

The Birth of the SNP: Support for the Rule of Welcome and Years of Formation