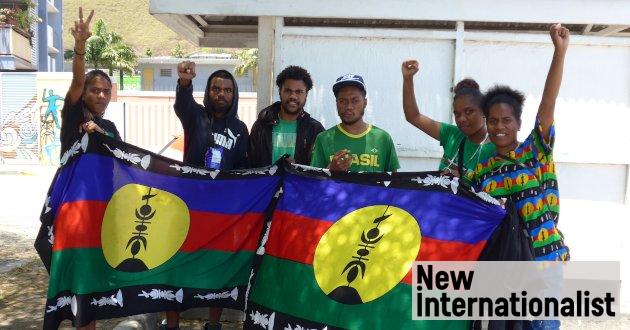 The non-natives of New Caledonia thought they would easily win an independence referendum. The results were a surprise. Nicolas maclellan reports.

On November 4, the French Pacific territory of New Caledonia held a self-determination referendum, the culmination of a twenty-year transition period introduced by the Noumea OK.

After a peaceful polling day, 56.4% of registered voters decided to stay in the French Republic, while 43.6% voted yes for independence.

These raw figures suggest a setback for the independence coalition of New Caledonia, the Before Release national Kanak and socialist (FLNKS), who has been campaigning for independence and sovereignty since 1980s.

In reality, the size of the yes gives the independence movement enough mandate to continue towards a new referendum in 2020. The FLNKS is encouraged by their increased support in working-class suburbs, rural areas and an unprecedented youth vote.

Opinion polls had predicted a massive defeat for the independence movement. However, as the votes were counted, viewers could see the worry on the faces of overconfident anti-independence politicians.

Early in the night, with the independence vote hovering between 25 and 30 percent, there was an air of triumphalism. As the night wore on and the vote for self-government increased to 30%, then 40% and beyond, the faces of anti-independence leaders deteriorated further.

Prime Minister of France Edward Philippe made a lightning visit to New Caledonia the next day. While welcoming the decision of the islanders to stay within the French Republic, he also recognized massive support for independence among the natives Kanak people.

20 years in the making

New Caledonia is one of the three French dependencies of the Pacific, alongside French Polynesia and Wallis and Futuna. The indigenous Melanesian population, known as the Kanak, are a minority of 39 percent in their own country, after generations of colonization and continuous migration.

Annexed by France in 1853, the islands – located off the east coast of Australia – served first as a prison, then as a land of free colonization. The main island’s central mountain range is rich in minerals, and the country holds 25 percent of the world’s nickel reserves. The nickel boom of late 1960s, driven by the Vietnam War and the space race, saw new waves of migration from France and Wallis and Futuna.

There were historical Kanak revolts against French colonialism, led by the chief Atai in 1878 and Chef Noël in 1917. But the modern independence movement was born from the 1970s, based on radicalized students returning from France, one Kanak cultural renaissance and the Union Caledonian change of course of the party from the demand for autonomy to independence, under the leadership of Jean-Marie Tjibaou (a charismatic leader assassinated by a comrade Kanak in 1989).

The establishment of the FLNKS in 1984, armed clashes between separatists, the French state and Right wing settlers. This period of conflict ended with the signing of the 1988 Accord. Matignon agreements and a subsequent agreement in May 1998, known as the Noumea OK.

The 20-year transition under the agreement saw the transfer of many powers from Paris to Noumea and the creation of new political institutions, including a multi-party government, Kanak customary senate and three provincial administrations.

There has also been a significant economic “rebalancing” between the wealthy southern province and the rural north and outlying Loyalty Islands, where the population is predominantly. Kanak. However, New Caledonia is still sharply divided between poor and rich, with poverty marked by ethnicity and geography – rural and indigenous communities lose out on all development indicators.

This chasm is most obvious in the capital Noumea, a city of yachts and squats. The anti-independence vote was strongest in Noumeathe southern suburbs of, where the rich own luxury apartments, boats and 4x4s, drawing massive wages subsidized by French taxpayers. On the outskirts of the capital, more than 8,000 people live in slums.

The independence vote of November 4 was drawn mainly from the Kanak the electorate, with a majority of non-Kanaks – European, wallisian, Tahitian or Asian heritage – vote to stay with France.

The more populous south and the capital remain strongholds of anti-independence sentiment, while the regions where the majority of the population is Kanak showed massive support for autonomy: the North Province (75.8% Yes) and the Loyalty Islands Province (82.1%).

On the other hand, the Southern Province, mainly no kanak the electorate, voted strongly 73.71 percent to stay with France, with just 26.29 percent of voters in the south opting for independence.

For many months, a slow wave of popular campaigning led by the FLNKS and other separatist groups led to a mobilization on ‘D-Day’. With non-compulsory voting, thousands of Kanaks turned out, many of whom had never voted before.

The final victory is not very comforting for the anti-independence right. Successive opinion polls had suggested that the yes would be between 27 and 35 percent. Conservative politicians had publicly threatened that a massive yes vote would pave the way for a rollback of many of the achievements made by the Kanak people since Noumea Agreement, including restrictions on the voters list for local political institutions, funding of rural provinces and land reform. The right-wing hoped that the victory would allow Paris to push for the removal of New Caledonia from the United Nations list of non-self-governing territories.

But the result of the referendum is only one step in a longer process. The Noumea Accord provides for a second referendum in 2020 in the event of a non-vote, which can be called by a third of the members of Congress. The separatist parties currently holding 25 seats out of the 54 members of Congress, they have the figures to proceed to another referendum after the provincial elections next May.

The day after the vote, most realized that the Kanak independence movement has a new wind in its sails. The quest for independence lives in the hearts of a new generation.

Patreon is a platform that allows us to offer more to our readership. With a new podcast, eBooks, tote bags and magazine subscriptions on offer, plus early access to videos and articles, we’re very excited about our Patreon! If you’re not yet on board, check it out here.