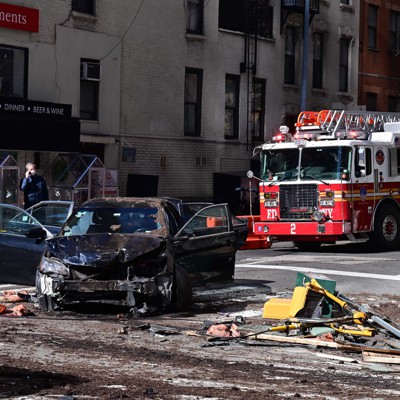 A new report showing a disturbing rise in red-light violations and traffic deaths on New York City streets has become the latest ammunition for local lawmakers in their effort to crack down on the city’s traffic control cameras. from Albany. The report, released Friday by street safety advocacy group Transportation Alternatives, shows more road deaths were recorded last month than in February since at least 2008. Red light violations also hit a seven-year high – the trends, according to the group, are directly linked to “the deadly impact of Albany’s control on the streets of New York”.

City lawmakers have for years lamented the state government’s stranglehold on New York City rules and regulations on a range of issues, most recently in a debate over the mayor’s control of schools in the city. Currently, the city must seek permission from the state legislature to install red light cameras and speed cameras. During the final months of Mayor Bill de Blasio’s tenure, he fought for more jurisdiction over traffic control mechanisms, including allowing speed cameras to be turned on 24 hours a day. Mayor Eric Adams also seeks permission to “manage the city’s camera enforcement programs in addition to empowering cities to enforce speed limits on their streets,” he said during testimony on the proposal. Governor Kathy Hochul’s budget statement before the state legislature last month. In response to Friday’s report Adams tweeted: “If our streets aren’t safe, our city isn’t safe. Period. Home Rule empowers the people who know our city best with the tools to keep our streets safe for every New Yorker.

The report contains the latest data showing an alarming spike in road deaths in New York City in 2021. Crashes killed 273 people in 2021, the highest death toll since 2013, according to Transportation Alternatives. Already, 42 people have died in traffic collisions in 2022, a 58% increase from the same time last year. Twenty-three of those deaths were recorded in February alone.

Transportation Alternatives highlighted in its report the correlation between road deaths and disabled speed cameras. In 2020, “nearly 40 percent of victims died in speed camera areas during the hours Albany asks New York City to turn off the cameras,” the report said.

“It shows the importance of designing streets for safety and developing automated enforcement tools that are frankly more effective than using armed police officers,” said Cory Epstein, director of communications for Transportation Alternatives. , at City & State.

New York City Department of Transportation Commissioner Ydanis Rodriguez also highlighted the effectiveness of the city’s speed camera program during a city council hearing on Monday, pointing to statistics that show a 72% decrease in speeding violations in areas where speed cameras have been located during business hours since they were installed in 2014. More than 40% of offenders have vehicles registered outside of New York, Rodriguez said. He closed his testimony before the council’s transportation and infrastructure committee by “joining the mayor in calling on the state to empower the city to run our self-enforcement program.”

If the transfer of autonomy is not part of the state budget due April 1, it will have to be taken up by legislation passed later in the session. To include the policy in the state budget, lawmakers would need to determine the parameters of the city’s jurisdiction over red-light cameras before a House’s budget proposals are due at the end of the month.

“I fully support this call,” Gonardes said of the city’s efforts to take control of traffic cameras. “If for whatever reason we are not successful in governing from home, we will certainly have the opportunity to license the successful programs that have already been put in place and expand them, while continuing to advocate more broadly to leave the New York City control its streets.”

Transportation advocates hope Hochul’s vow to work with Adams – after a lingering power struggle between their predecessors – will help them move toward a “self-reliance” deal this year. “She has a different heritage and history in local government, and we think that’s very promising,” Epstein said.

Hochul expressed openness to the idea in a previous interview with City & State in November, when she said, “Why does the state legislature and governor have to weigh in on having a school district in does New York City have speed cameras or not? in school zones? Tell me why this needs to be relegated to a question that becomes political football at the end of a session in terms of extracting promises, concessions. I don’t want to rule that way.

In addition to his call for home rule, Adams also outlined plans to improve crosswalk safety by redesigning 1,000 intersections with “enhanced traffic signals, raised crosswalks and other safety measures.” ‘expanded pedestrian space and visibility,’ he said Jan. 19 in what was his first major announcement of a street safety policy since taking office. The DOT will also build raised crosswalks at 100 intersections, and the NYPD will step up enforcement of non-surrender violations at crosswalks, Adams said.