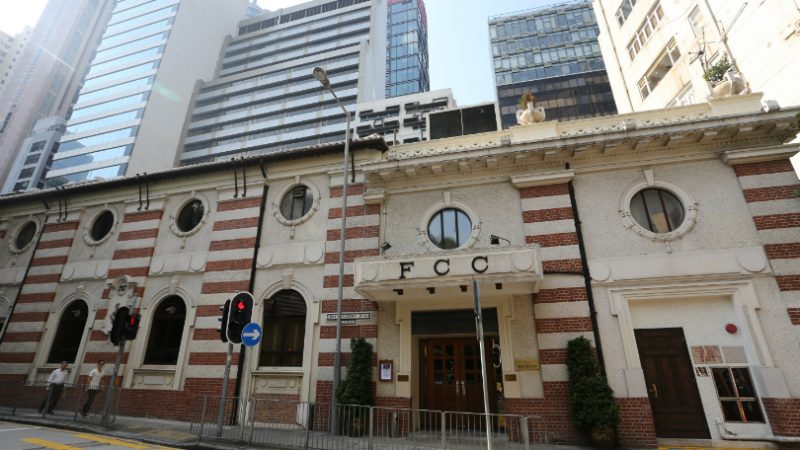 This article is a summary of reports published between August 4 and 10, 2018 on Hong Kong Free Press. The reissue is based on a partnership agreement.

A recent war of words between the former Hong Kong managing director and the local club of foreign correspondents shows how Beijing is forcing Hong Kong journalists, local and international, to respect its political red line.

The incident began when the Foreign Correspondents’ Club (FCC) announced on July 30 that political party leader Andy Chan Ho Tin would give a talk at the Club on August 14, entitled “Hong Kong Nationalism: A Politically Incorrect Guide on Hong Kong under Chinese Rule ”.

Hong Kong is a special administrative region of China with more economic and personal freedoms than the mainland, a configuration known as “One country, two systems.” In recent years, Beijing has pressured Hong Kong to pass new laws that strengthen the “One Country” part of the principle.

Shortly afterwards, a representative from the Chinese Foreign Ministry’s commissioner’s office in Hong Kong visited the FCC and urged them to reconsider the decision.

Chan is the chairman of the Hong Kong National Party (HKNP), which advocates for Hong Kong’s full independence from China. Last month, the Hong Kong Police Company Registration Department issued a legal recommendation to the Security Secretary to ban HKNP as a political party. Quoting Section 8 (1) (a) of the Hong Kong Companies Ordinance, the department said it would be “in the interest of national security, public safety, public order, protection of the liberty and rights of others ”.

After reviewing the past activities of the HKNP and Andy Chan’s talks, law enforcement authorities concluded that the HKNP was a threat to national security. The recommendation stated:

Police handed Chan a 900-page dossier detailing his and the party’s activities and outlining his proposal to ban the group. Chan must respond to the case by September 4. 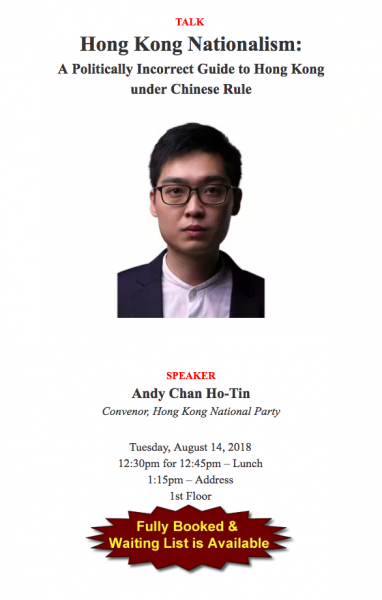 The visit to the Chinese Foreign Ministry’s FCC was not necessarily a sign of a problem. Hong Kong media organizations are used to receiving “political advice” from Beijing officials.

But tensions began to escalate when former Hong Kong general manager Leung “CY” Chun-ying stepped in and criticized the FCC for crossing a so-called “red line”:

Leung then posted an open letter on Facebook, in which he compared Andy Chan’s hosting to criminal and terrorist activity:

Presumably, then, you will defend your decision by also asserting that those who oppose Taiwan’s independence would have the same opportunity to present their views. By following this logic, you are unlikely to draw any lines against criminals and terrorists. As I said, we should be very concerned.

He further claimed that FCC had paid “nominal rent”. In comments, his supporters pleaded for the Hong Kong government to take back the property.

Leung’s claim was refuted by former FCC board member Francis Moriarty as an ill-informed threat:

Leung is completely wrong about the rent… When I left the FC board three years ago, we were paying around 550,000 HKD (70,060 USD) per month and were fully responsible for the upkeep of the historic building. .

Leung is essentially asking the FCC to cancel Chan’s conference and stop inviting similar guests in the future, otherwise the lease might not be renewed or even be resumed sooner… This is blatant political pressure.

But CY Leung’s argument has been echoed by many pro-Beijing media and politicians. On August 8, a group of 30 protesters took to the streets and demonstrated outside the FCC in Central to demand that Andy Chan’s speech be quashed.

The city’s public broadcaster, Radio Television Hong Kong, Leung Ka-wing, told a regular meeting on August 9 that the broadcaster should not be used to defend Hong Kong independence and banned the live broadcast of Andy Chan’s speech to the FCC. The RTHK program staff union explained that the decision whether or not to broadcast a live event is usually made by the section chief of the various program teams after internal deliberation. It is unusual for the leader to make a decision this way.

More than half of local media owners in Hong Kong also sit on government bodies appointed by Beijing, such as the National People’s Congress. Even though there is no law in place to prosecute media for presenting political dissent, the FCC saga sends a strong signal to media owners and their information management teams on the “red line. “. The effects are more than chilling. 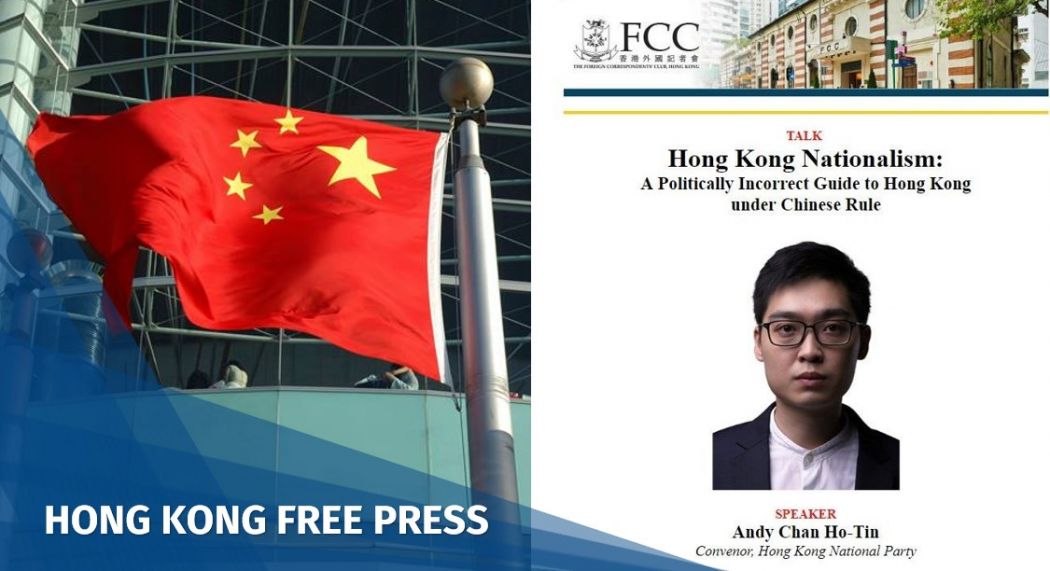 A representative of the Chinese Foreign Ministry in Hong Kong tried to prevent pro-independence activist Andy Chan from speaking at the Foreign Correspondents’ Club (FCC). The acting chairman of the FCC confirmed the incident.

The Club will host the organizer of the Hong Kong National Party for a luncheon on August 14. Announced on July 30, the conference is entitled “Hong Kong Nationalism: A Politically Incorrect Guide to Hong Kong under Chinese Rule”.

Sources familiar with the matter told HKFP that the FCC has been “urged to reconsider its decision” to host Andy Chan, whose party is facing a government ban. A representative from the Commissioner’s Office in Hong Kong traveled to the FCC to deliver the message. But the club will not change its plans.

The club’s interim president, Victor Mallet, confirmed that the Office had made representation to the FCC: “Our position is that we are a club that is a very strong defender of press freedom and freedom of speech. ‘expression.”

Mallet added that the club welcomes different opinions and political opinions: “Sometimes the opinions of our speakers are odious to the Chinese government, sometimes they are odious to opponents of the Chinese government… Our opinions are not represented by our speakers. We want to hear from speakers of all kinds, whether right or left, extremist or not. We will continue to do so.

The introduction to the event said that Chan will talk about his vision for a future nation of Hong Kong: “The lecture will cover a brief history of the Party and touch on what Mr. Chan thinks it means to lead of a movement trying to build a national identity for Hong Kong, and his reaction to the government’s strong reaction to his party.

Mallet told HKFP that the Chinese Foreign Ministry has helped organize FCC speakers from the pro-establishment side or Chinese visitors.

“[I]It is true that it was difficult to obtain pro-establishment or pro-Beijing [speakers] come talk. But we always welcome them as we welcome their opponents.

Last month, police told the government there was a strong enough case in the interests of “national security, public safety, public order, protection of the freedom and rights of othersfor the Security Secretary to ban the party, citing Section 8(1)(a) of the Companies Ordinance for the first time after the surrender.

On July 17, Chan was given 21 days to respond to a 900-page dossier, which contained 700 pages of his speeches and events collected by police over two years. Chan asked for an extension until October because it was “unfair” for him to respond at such short notice.

The Security Bureau this week extended the deadline to 49 days – the party must now respond by September 4. However, the Bureau did not respond to Chan’s other request for access to surveillance records relating to him. 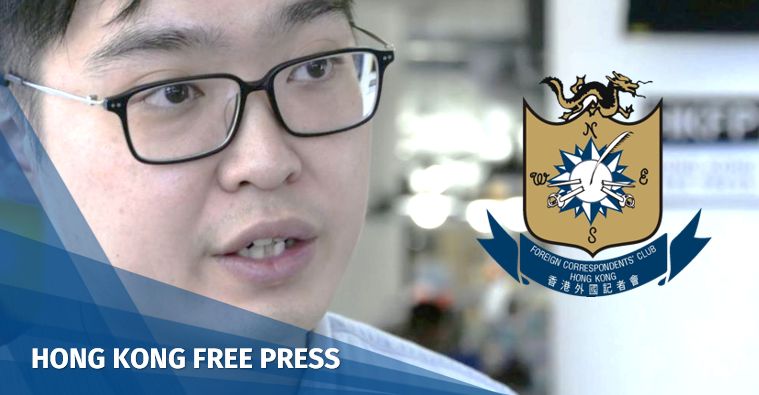 Independence activist Andy Chan said the Chinese Foreign Ministry’s attempt to block his speech at the Foreign Correspondents’ Club proved that Hong Kong’s attempt to ban his party was a “political incident” beyond the local government.

The Club will welcome Chan, chairman of the Hong Kong National Party, for a luncheon on August 14. Announced on July 30, the speech is titled “Hong Kong Nationalism: A Politically Incorrect Guide to Hong Kong Under Chinese Rule.” The party faces a ban, with authorities asking Chan to respond to a 900-page dossier by September 4.

A representative from the Chinese commissioner’s office in Hong Kong visited the FCC, urging it to reconsider its decision to host Chan.

“From top to bottom, it was planned by the Chinese government, the script was written,” Chan told HKFP.

“This bold exercise of pressure on the FCC is a clear suppression of freedom of speech and the freedom to conduct interviews. They treat Hong Kong like parts of China, where information can be blocked. “

Not content with simply denying Hungarians the right to free speech, the Chinese government pressured the foreign press to censor itself, trying to block our party’s luncheon in @fcchk August 14. The FCC will be broadcasting the conference live on Facebook.

In a statement, the commissioner’s office said the independence forces have seriously violated the Chinese Constitution, the Basic Law and the laws of Hong Kong, and harmed the country’s national security and territorial sovereignty.

“Such a move may result in self-censorship on the part of groups to avoid sensitive topics and speakers, as our annual report on freedom of expression points out. We support the FCC which stands by its principles, ”Shirley Yam of the Hong Kong Journalists Association told HKFP.

Cédric Alviani, director of Reporters Without Borders (RSF) East Asia, told HKFP that he denounced the attempted intimidation of the FCC, “a club which represents the very spirit of press freedom in Hong Kong” .

“We urge Beijing to respect freedom of speech and freedom of the press, which are explicitly written in the basic law signed by China before the handover,” Alviani added.

Acting club president Victor Mallet confirmed that the Bureau made a statement to the FCC: “Our position is that we are a club which is a very strong defender of press freedom and freedom of expression. .

Police last month told the government there was a strong enough case in the interests of “national security, public safety, public order, protection of liberty and the rights of others”For the security secretary to ban the party, citing section 8 (1) (a) of the Companies Ordinance for the first time after the surrender.